The 4-Season Color System was wildly popular. But in the early 1990's, the 12-season color system fixed a problem with the original four seasons, and that was it as not complete.

While this analysis worked perfectly for a quarter of the population, there were many more that it didn’t work for as well.  For example, it was found that some people can wear both warm and cool colors and look great. How can that be?

Discovering in high school that as a Warm Autumn I ‘owned’ brown as a color, it really perplexed me when my friend, who was clearly a winter (or so I thought), could also wear dark brown and look great. It wasn’t fair. But I found out later it was because she was actually a Deep Autumn. And Deep Autumns can often be incorrectly labeled a Winter due to her dark coloring. They also share many colors from the Deep Winter palette.

From Four Seasons to Twelve

Eventually, the 4 Season theory was later refined and developed into the more complete and more accurate 12- Season Color System. They added the concept of "Chroma" to the system.

The 12-season color system can also be called the “Flow Seasonal Theory”. In this, the traditional 4 seasons - Winter, Summer, Autumn, Spring - will flow into one another. At the points where they overlap, this creates a new season. For example, as mentioned above, the Deep Autumn is really a blend of Autumn and Winter. The Deep Autumn has much of the warmth of the typical Autumn season, but the depth of a Winter.

Let’s look at the Winter season, for example, from the image below. From the chart you can see that a Winter that flows into a summer is a Cool Winter; into an Autumn is Deep Winter; into a Spring is Clear Winter. 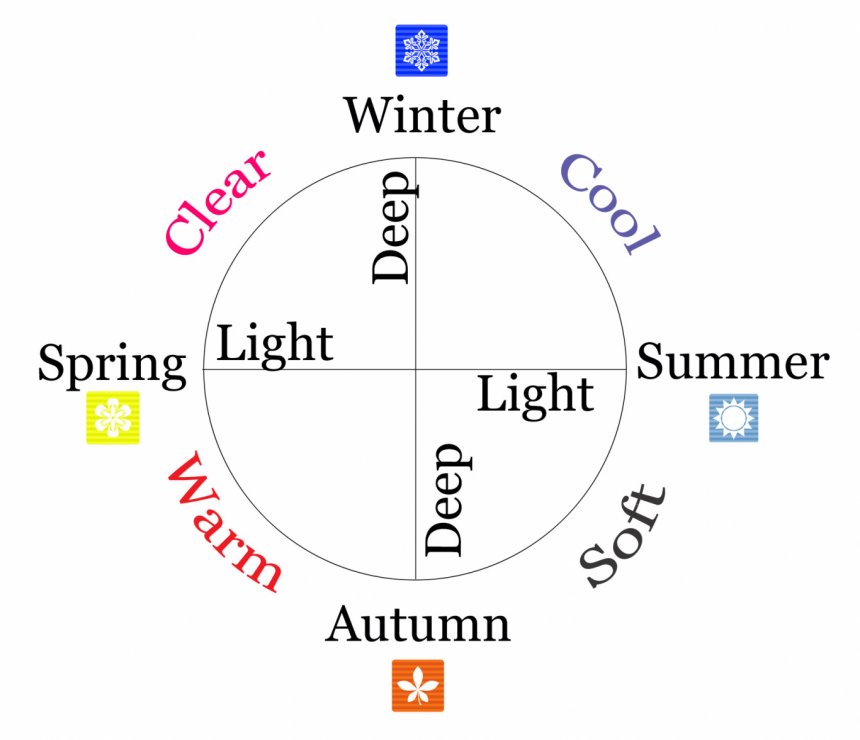 Where the seasons overlap, you will find some shared colors. The Clear Spring and Clear Winter will share some colors like Emerald Green and black (the only Spring that could handle black, though a black brown would be a better choice). The Cool Winter and Cool Summer will share colors like Violet and Deep Rose.

I like this chart because it shows why someone, as an example, who is a Soft Summer might look good in an olive color (traditionally an Autumn color), because they are a blend of Summer and Autumn. Some of those ‘traditional’ autumn colors might pop up the Soft Summer. The same goes for all the seasons.

Notice that where seasons blend, you will find the colors to be more neutral than strictly warm or cool. You need to look for the 6 dominant characteristics first: Light, Dark, Warm, Cool, Soft, Clear. Then when you figure out the secondary characteristic, you will find your season.

Incidently, the first part of this method of finding one's dominant characteristic is called the "Tonal Method". In that system, the 6 dominant traits - light, dark, warm, cool, soft, clear - are what people look for when they are doing an analysis. Only these traits.

Note: this is only when you do the dominant/secondary method. Other systems will usually begin determining your undertones first.
The Tonal System is, in my opinion, a very helpful aspect of identifying someone, but I feel it is just a part of the whole picture. Not the whole picture itself.
However, if you are able to identify a dominant trait in someone, that’s wonderful because then you are 75% there in identifying a person’s full Season.
It will be the secondary traits that will then finalize a person’s season.

Here is a the 12-Season Color System Theory in a nutshell:

Each person will have 1 of 6 dominate “characteristics” in their coloring which is the primary determining factor in analyzing them. They are:

To illustrate:
If you have deep coloring, then the second determining factor is whether you look better in warm colors or cool colors. If cool colors flatter you best, then you are determined to be a “Deep Winter.” However, the most important factor is that you are “Deep” so wearing what was considered a traditional “winter” color that is light in color won’t work for you. In fact, you can wear some of the deep colors of Autumn as well. Deep Chocolates or Deep Forest Green will look great on you, for example.

You will either be a:

Essentially, each of the original 4 seasons were split into 3 more defined and more accurate seasons in the 12 season system. 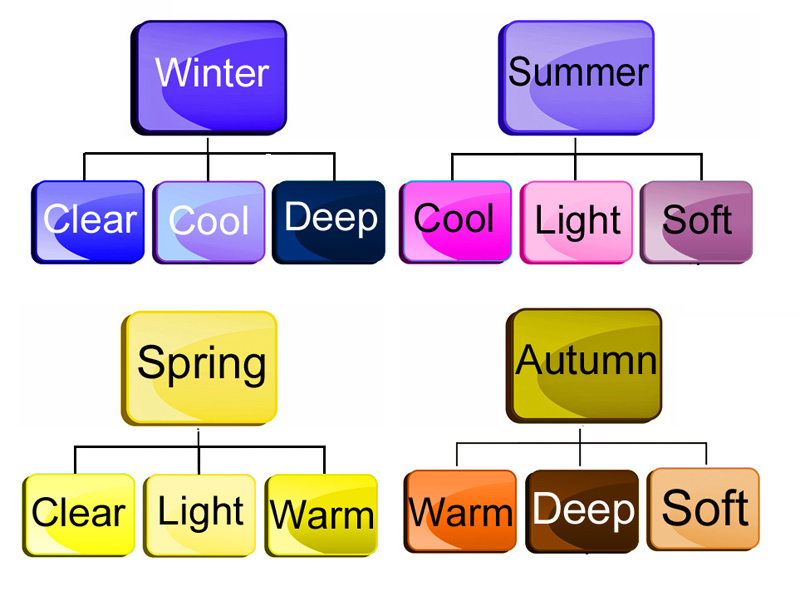 Later systems utilized another aspect that really wasn't included in the 12-season color system. I will talk about it further as we talk about how it evolved over time.

Back to Home Page